A few things coincided recently to incite me to write this blog post.

Firstly, and most visibly, protestors have been rioting in Ferguson (see here and here for the Wikipedia summary of the shooting and protests, respectively), and there’s been an outcry of public opinion. Now, people don’t necessarily agree about the merits and justification for the protests and shooting, but the one thing they all seem to agree on is that they should all express their opinions in the loudest and most visible way possible.

Secondly, I just finished Cory Doctorow’s Little Brother (free eBook here, physical book here), an amazing book with themes of governmental abuse of power, dissent against the state, and general anger against the injustices of the system.

What incited me to write this article more than anything else, however, was this tweet.

This tweet was deleted or otherwise removed after its posting. I’ve recreated it in its original form.
Take a minute to read what a buddy of mine in the Marines just posted FYI he just got back from a tour in Afghanistan 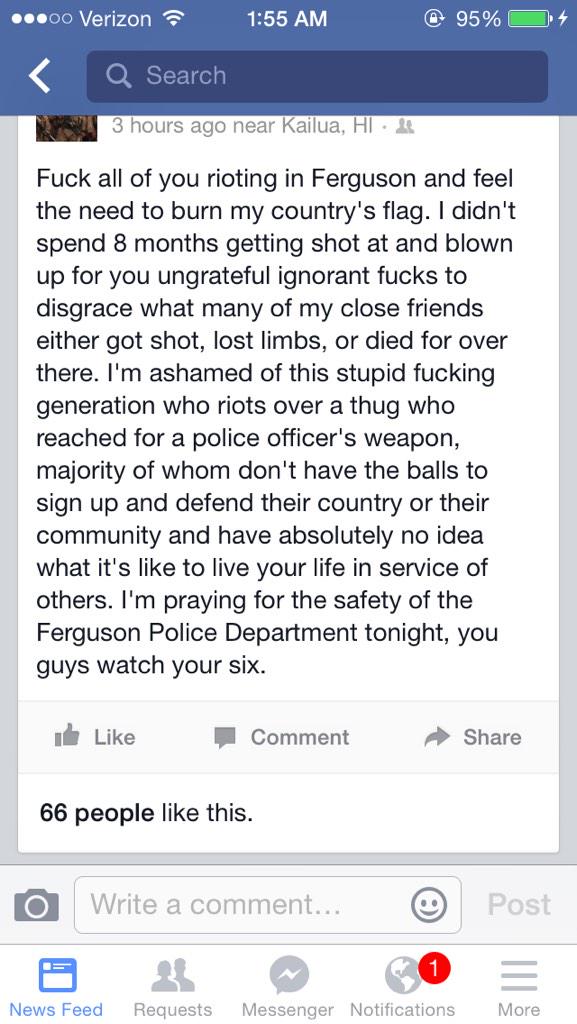 I didn’t see it on Twitter, despite its thorough saturation over the past seven days; a friend of mine sent me a screenshot of the tweet and this message:

Jared: I disagree with this soldier when he said ‘over a thug’

I read the Facebook post (this is getting to Inception-like levels of social network nesting) and replied with:

Sean: the soldier fought for the right for us to burn our flag.

Jared thought that was funny, but that wasn’t my minuscular attempt at humor; this was me stating what I thought was obvious.

Let me preface what follows with a quote, often misattributed to Voltaire:


“I disapprove of what you say, but I will defend to the death your right to say it.”Evelyn Beatrice Hall

I don’t hold an opinion about the shooting of Michael Brown. I don’t believe any of the witnesses were telling the truth, including Officer Wilson himself. I don’t believe in the idea, smacking of fallacious middle-ground reasoning, that the truth is “somewhere in the middle”. There are hundreds of possible permutations, within the confines of the physical evidence, that would exonerate Office Wilson, and hundreds of others that would condemn him.

Only two people know for sure what happened on the ninth of August; one is dead, entombed in St. Peter’s Cemetery, Section 10, Block F, Lot 12, Grave 4, and the other could very well be lying through his teeth or simply misremembering the facts. There’s no reason for me to hold an opinion about this; furthermore there’s simply not enough evidence for an objective, uninvolved observer to draw any valuable conclusions, so I’m choosing to withhold any judgment on my part.

However, I do not withhold judgment about protesting. I believe that Americans have the right to protest against their government. As I said to my friend (warning, strong language):

Sean: the fundamental fucking principal of America is that we are allowed to dissent against the state
Sean: and against society
Sean: and against police
Sean: and whatever the fuck we want to
Sean: burning the FUCKING flag is why america was started

Police violence against protestors is unacceptable, period. If there are rioters in the crowd, that does not mean that the entire crowd has suddenly surrendered their human rights. Also, the Ferguson police, like many relatively small police departments around the country, are equipped with military surplus weaponry and equipment, far beyond what they need or are trained in proper use of.

This video, by HBO’s Last Week Tonight with John Oliver, does a much better job summarizing the militarization of police than I ever could hope to. It’s a bit of a lengthy watch, but highly recommended.

Let’s start off by settling the debate about legality: yes, it is legal to burn the American flag. More specifically, it’s protected as “symbolic speech” by the Supreme Court on two separate occasions, first in 1989 in the case of Texas v. Johnson, and again in 1990 in U.S. v. Eichman. If you are a citizen of the United States of America, you have a constitutional right to burn the flag.

But this article isn’t about whether you “may not” burn the flag; it’s about whether you “ought not” burn it. People like the soldier who said “Fuck all of you … [who] feel the need to burn my country’s flag.” are promoting an ideal of national unity that doesn’t, and indeed shouldn’t exist in the United States. The United States is not a homogeneous mix of races, creeds, ideals, and beliefs. It’s simply false to say we are one; “E Pluribus Unum” is not supposed to institute a societal thought police, making sure everyone is good and nationalistic. America’s soldiers fighting overseas are fighting, according to some, for American ideals.

The most fundamental ideal isn’t nationalism, patriotism, or supporting government to a fault. Americans are not supposed to believe in their country, right or wrong. Dissent, being able to say to the government, or society, or the police, or whomever that “You are wrong,” is the founding principle of American society. Saying to the King George V, “You are wrong for oppressing the colonies,” is the same as saying to the Ferguson police, “You are wrong for allowing this killing to happen.” Nobody’s arguing for Ferguson to secede from the United States, and in some respects the protests are simply a method for the peoples’ voice to be heard, but this is not a society where that should be punished with tear gas and truncheons.

The soldier says that he “didn’t spend 8 months getting shot at and blown up for you ungrateful ignorant fucks to disgrace” the American flag. But, to some extent, that’s exactly why he and the entire military are fighting. The American ideals that the flag symbolizes, paradoxically, include the right to burn that very flag. The military are fighting for the right of the “ungrateful ignorant fucks” to protest, to let their voices be heard, and to burn the flag. Dissent is what makes America different, and it is what makes us great.

I’m altogether fed up with this jingoistic idea that if you don’t agree with one particular belief set, no matter how prevalent, that you are un-American, that you’re a damn dirty commie or some other such nonsense. The Founding Fathers wrote:

Congress shall make no law respecting an establishment of religion, or prohibiting the free exercise thereof; or abridging the freedom of speech, or of the press; or the right of the people peaceably to assemble, and to petition the Government for a redress of grievances.
First Amendment, Bill of Rights

That’s what soldiers are fighting for: freedom of speech, assembly, and religious belief (or lack thereof).

Back in the 1700s, as part of the Intolerable Acts, an act called the Massachusetts Government Act proclaimed, in part, that “no meeting shall be called without the leave of the governor.” This was to restrict the meetings of merchants and revolutionaries, from which had sprung the idea for a boycott of British goods that crippled the debtor Britain’s revenue. Arguably, this is why freedom of assembly was included in the Bill of Rights. Freedom to protest and to say what one wants without restriction of the government is on of the most important foundational points of American society.

To be ignorant of the history of America, to be ignorant of the fact that America is a nation where dissent is welcomed, where speaking out against unjust actions, by the government or otherwise, is a national duty, is a disgrace. Those who hold the belief that “if you’re not with us, you’re against us” (who’s “us”, by the way?) are simply incorrect about what American actually is.

Coming back to my opening quote, the soldier claims that he does not fight for those who burn flags. I don’t think he lies, but he is perhaps misinformed. He may not agree with the reasoning of those who protest (hell, if someone agrees with every group that protests then they probably have a serious case of multiple personality disorder) but agreement does not equal lack of protection. If the Army only protected those who agreed with its policies, then America would be royally screwed. It’s a good thing that the military will fight to the death to protect their right to say what they wish, and to protect their right to burn the flag.

PS: I’d like to thank the many people who helped me write and edit this article, in particular my English teacher Mr. Rooney, Jared D’Alessandro, and everyone else.